Every Cloud Has a Silver Lining

February 11, 2013
How do you react when things don't go the way you had planned? Do you freak out, lash out and get upset or do you take it as a hint from the Universe that it had something better, different in store? 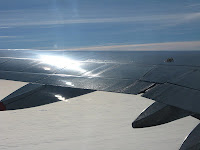 I just spent some time in Europe with my mom to celebrate her 86th birthday. We made a rough plan for each day and now looking back, only about one or two of those plans became reality, the others had various changes from minor to total. On my mom's birthday we had planned to go out for a meal at a certain restaurant, but we missed the bus by just one minute. So there we stood watching the bus disappear and then our eyes were drawn to the sign next to the door of the restaurant by the bus stop. We looked at each other and said "why don't we eat here?" It turned out to be a delightful meal and we timed it so that we could get on the next bus to follow the rest of our plan for the day.

On my way back from Europe, I was so pleased to have finally gotten on a plane direct to Halifax instead of always having to fly to Toronto first and then backtrack to Halifax. It looked like everything was going to be just fine, even though I had heard that the weather in Halifax wasn't too good. The plane took off on time and I followed its progress on the TV display above the empty seat next to me. Over Stephenville, Newfoundland the map displayed 1:07 hours to Halifax. Then to my surprise the Halifax destination disappeared from the display and instead it said 2:27 hours to Toronto. I starred at the screen for a few minutes wondering if I was on the wrong plane, when the captain announced that due to icy runways in Halifax our flight had been diverted to Toronto. Shucks, I wanted to go home. 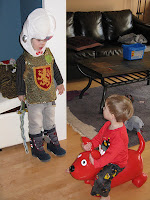 Once I landed in Toronto mid afternoon, I called hubby who told me that Halifax had gotten 16 cm of snow, followed by 11 hours of freezing rain and then a cold front went through and turned all roads into ice rinks and planes can't land on that. Next I got in touch with my kids, all 3 live in Toronto. First Air Canada said we would fly to Halifax at 6 pm, but that was cancelled and the passengers were told that we could get a voucher for a hotel and then re-book once the flights were going to Halifax again. I called my son who came to pick me up. The next day I re-booked my flight, but gave myself an extra day to spend with the grand-kids and my 2 daughters. I had a grand time playing with the grand-kids and had a meal out with my daughters all thanks to Air Canada. Things turned out just the way they were meant to and I arrived back home in Halifax 2 days late.

How do you handle change of plans? Do you view change as a disaster or an opportunity? I would love to read your comments.