July 28, 2009
When I grew up in Switzerland and started school in 1960 I had to learn my first foreign language: High German. School books, books and newspapers are all written in High German. What is High German? It is the language that is spoken in Germany and Austria. Then what is Swiss German? It is the dialect of German that is spoken in Switzerland. People bordering Switzerland like Southern and Western Germany and Austria have a similar dialect and can all understand each other easily. Once you move North past Frankfurt in German the accent changes and to understand each other people switch to High German. 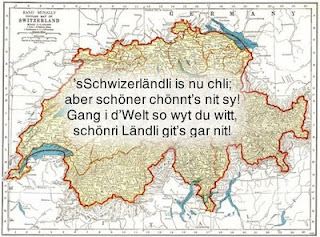 What is the major difference between High German and Swiss German? It took me about 20 years after leaving Switzerland to figure it out and suddenly it made sense why I found learning English so easy. Swiss German and English share the same sentence structure. I can take a Swiss German sentence and translate it word for word and end up with a proper English sentence. You can't do that with High German.

Now what has changed since I went to school? With the increased use of computers and especially social media and texting the language used is Swiss German. For me it feels very strange to write in Swiss German. The writing is basically phonetic, you write the way you speak. Switzerland has 27 Kantons (Provinces) not all of them German speaking and the dialect is different for each. When I grew up I was told that writing in Swiss German would make it difficult for everybody to understand what was written. Now with computers that all has changed.

I fund the explanation of Swiss German on Wikipedia very interesting. I also learned that the Swiss High German technically is called Swiss Standard German. The following links are in English: