34 Years since I first came to Canada

Today I am celebrating my 34th anniversary of arriving in Canada. I had met my husband in a kibbutz while working there with a group of Swiss volunteers. Once I returned to Switzerland I had to find a way to get to Canada. The only option I had was as a mother's help in Toronto, Ontario, which was 1500 km away from where my future husband lived in Saint John, New Brunswick. The culture shock and the language difference where quite big. I spoke English, but not very well. Reading an English newspaper took ages and even then I didn't understand all the words and had to look them up. Now after 34 years, I am told I still have a slight accent, but I don't have any problems with English any more. The funny thing is, that often I use very antiquated English expressions, I have no idea where that comes from. I am also famous for combining two expressions into one. Example: Every so once in a while, which should be 'every so often' and 'once in a while'. 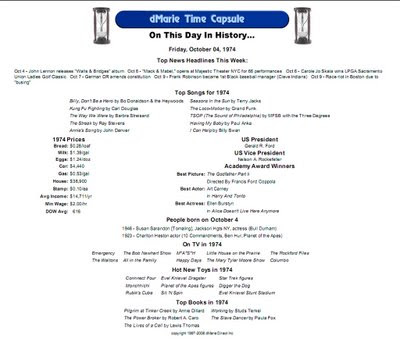 I have found a website that tells you how things were way back when and took a screenshot of the information. I also discovered that printing the print version of the resulting page to CuteFDP gives a PDF page that can be shared easily. This information make a great gift.