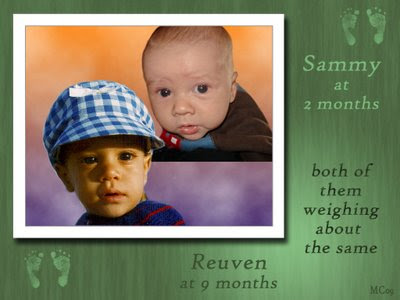 I don't usually post pictures of family members. But his one I just could not resist. After I received the picture of my grandson and took a good look at it, it reminded me so much of a picture of my son. So I dug through my pictures and found it.

My son is 9 months old in his picture and my grandson is 2 months old in his picture. They probably weigh about the same in the pictures. My son was about half the weight of his son at birth, that's the reason for the age difference in the pictures. I think they resemble each other quite a bit. I know it is still a bit too early to tell who my grandson will take after.